Well, it’s been around a month since I’ve posted on here about the updates to Formula Racing and there’s a lot more going on with the game now! Read on to find out about what’s done and what’s still to go.

There’s now 10 tracks designed for Formula racing, including my new personal favourite USSR – 1! I’m going to be re-visiting the track designs for previous levels shortly, in order to spruce them up a tad.

I foolishly forgot that I had a spare 128 tiles to use for either sprites of background tiles.. So, I’ve been making use of the new tiles to add more definition to the track layouts. Mainly USSR-1!

Just racing the opponents wasn’t enough for me after a while. So I’ve added more obstacle tiles that will blow your car off track should you run onto them. You will run onto them!

Because, every racing game needs boost tiles of course! So far, only on USSR-1 but that’s fine. Revisiting older tracks, yeah!

So, yeah, that’s a fair amount of stuff added to the game which has had a couple of important effects.

The games plays better and is getting closer to being an actual game now.

I’m seriously running out of spare ROM space for my main game loop – 270 bytes at last count tonight. I have sfx to add and music!

Yes, that’s right, MUSIC! I’ve been chatting to the fantastic gameboy chiptune composer NordLoef about in-game tracks and he’s agreed to help make some music, which is really great news, I can’t music for toffee, cake, biscuits, even the promise of coffee and a peanut butter wrap.

So, yeah, he’s going to be in the game credits and, hopefully getting a physical cartridge at some point! I’m really looking forward to importing the tracks into the game, that’ll really make it a more complete gameboy game and hopefully some people out there will enjoy it also?

So, I noticed that Gamejolt now allow you to play gameboy ROMs directly from your browser, that’s pretty cool I thought, best upload some games I’ve made to see how it runs then.

And, lo and behold, 5 games uploaded and they all seem to be emulated rather well, they even included CGB (Gameboy Colour) Support on there also. 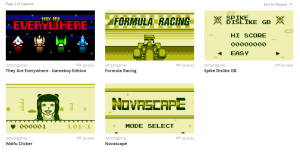 It seems like a nice place to host the files, they’re not going to take up much space either way, but gamejolt serves as a handy place to put them all! View, Play & Download these lil Gameboy beasties here!

Because I’ve been busy beavering away in GBDK of course! Here’s a brief video with some nice details on progress with the game and, what needs to be done before I put it out in the wild.

It’s taken a long time but I’m over the 50% mark now, just need to cram the code into what space I have left (just over 2k in my main rom bank)

I think I’ve finally found a solution to my super gameboy problems, which I’ll be playing about with this week, it’s exciting stuff for me at least!