So, I’ve established some form of racing A.I. which will at least, keep them on the track a lot better and they still perform some homing in on the player, making them particularly tough to pass easily on the test track at least.

Lap counters, speedometers and damage counters are in place and ALL THE BASICS ARE THERE! Which is really nice, but. I’m pretty much maxing out the CPU on the Classic Gameboy, which means there’s not much more I can fit in before things get janky and framerate-y.

Essentially, I’m now really limited to what else I can add to the game without breaking the Gameboy version (the Gameboy colour version is a-okay though, faster CPU (~8MHz) so more time per frame)

Hopefully some power-ups are possible. I’m thinking either boost pads or boost fuel drops in odd places on the track would be pretty cool to force the player off-line.

I **could** drop the game down to 30fps instead of 60 but I don’t really wanna do that. That smells of just giving up on performance, there’s got to be another way around it.

I need to add some toughness to handling the cars also, make the controls a biut more analogue in the steering. That should make things a bit more interesting regarding mastery of the game.

The Lap count is currently going up from 0 and taking up to much window space so It’s going to be changed over to a countdown instead with “L:XX”. With XX being the number of laps remaining.

There’s only a few days left until the end of the month now and #1gam is looming, I’m still hoping to add a few game modes in there though, including a championship mode, time attack, not to mention intro screens, car selector and results summary. Oh and a password system.

I think I’m going to need to cut-back a bit! 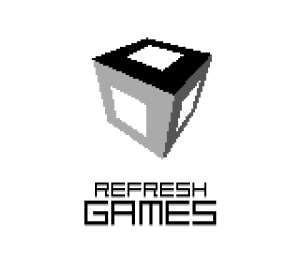 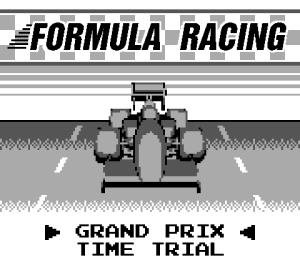 Not the most productive day for coding today but, thanks to my sleep pattern being slightly messed up this weekend, I managed to fit a couple of screens of pixel art in tonight / this morning.

The Refresh Games logo needed some Gameboy love and should fit easily into RAM, but, the main title, I’m not so sure about.

Some clever tile mapping will be needed no doubt, I guess that’ll be tomorrows gubbins!

Still, it looks pretty cool there, I used a 3d model of super deformed F1 car I’d made a couple of years ago which just seemed to fit in really nicely when posterized in Photoshop.

We’ll see tomorrow I guess then.

[P.S. most of my tutorial code for part 2 of my GBDK tutorial series is nearly ready also, it just takes a while to write all about it.] 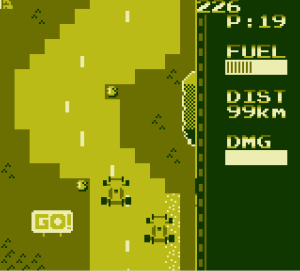