Yes! I’ve finally found some lovely people from 8-bit Evolution to team up with who publish retro games! They’ve taken a liking to a few of my games in-progress so far and now they really need to be brought home over the finish line.

This is one of those geeky dreams of mine that I had since being on the playground in the 90’s, to have a game of mine on a Nintendo console, on an actual cartridge, complete with box and instruction booklet, the whole shebang!

So, I really need to tighten up some code on Formula Racing to make it as optimal as I can (again) in GBDK, get the password system in-place, sort out that difficulty curve, add some endings, some sorta music and that game will be done and ready for perusal. Also, I need to make some awesome box art like I made for They Are Everywhere 😉 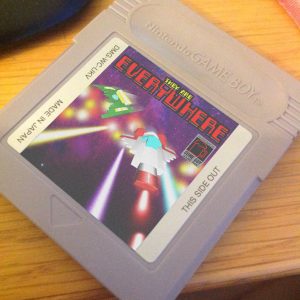 It’ll be one of my game developer “awesome things to accomplish” things marked off the list and I never was sure which way to achieve it so I’m very grateful for 8-bit Evolution to reach out to me on this one.

And there I was considering some Sega Master System development instead. Well, maybe again in the future eh 😉