I got way more into customising the colour palettes today, found out a way to set each background tile to have a certain palette index on both bkg and window layers and it’s looking pretty cool!

Sure seems to take up CPU with how I’m doing it though, when a new scroll line evnt is triggered, the colour changes add a lot to the CPU usage, which isn’t great. The gameboy colour does have a fast mode which might mitigate some of this issue but I do need to find a safe way to determine which hardware I’m running on so I can avoid running unnecessary code for greyscale gameboys. 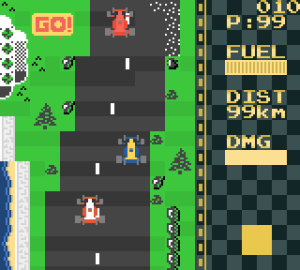 Wheee racing games huzzah! I’ll have something ready for the end of this month I reckon. Just not sure how complete it’ll be. March brings me back to finally finishing off They Are Everywhere. 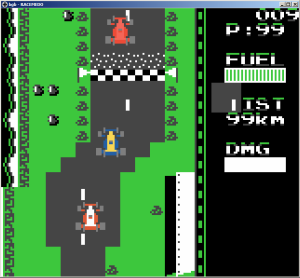 Might see if there’s any interface to the super game boy I can add for borders, etc.

So, tonight, I fixed up my scrolling code, it turns out I wasn’t too far out with what I had done before a few nights ago, but little bits of code logic were incorrect and, after I noticed that my main issue was that my test level length wasn’t divisible by 32, which was causing the second scrolling loop to become maligned by 4 rows each time through, the rest came together pretty easily.

Now that’s working though, I’ve bugged out my rather basic background collision routine, which now needs to sync up with the scrolling background rather than simply integer divide the y position.

Basically, it needs an offset or two to get working again, which should be okay, as long as it accounts well for overflows should they occur, that’s for tomorrow though now.